The story of Glenn 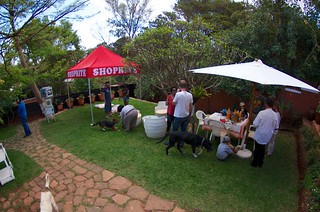 The party with all the humans

Last weekend I brought my humans at Auntie Carlina’s, the human that manages the house for disadvantaged doggies « Animal SOS Madagascar« . I bring them there often because there is a lot of work to do and while I take care of the Dog Handlers, Auntie Carlina takes care of my humans.
It must be said that I wanted to bring Saussage Vanille back to her old house as she was starting to miss Animal SOS, and who knows, she might rather go back , which would give me a break (during my holidays…)!!

This last visit was not by accident, and we were all there, doggies of all fur types and humans as well, to thank a very special human cub.

His name is Glenn, and he probably is not much more than one year old* and hasn’t had his first vaccine booster shot yet. He is of the “Canadian” breed, a human breed that goes way back, smells like caribou and can handle very low temperatures. If a Newfoundland terrier or Canadian Eskimo doggie is passing by, maybe he or she can tell us more about this exotic human beed?

A character trait I didn’t know of these “Canadian” humans seems to be their kindness (like all humans at Auntie Carlina’s) and their “generosity”.
“Generosity” is when someone gives its dog food to others, somewhat like the strangely dressed human at mass on Sunday who gives away all of his flat kibble once everyone is done mumbling for hours …

So, we were invited by Auntie Carlina to celebrate Glenn’s birthday. “Birthday” is when humans eat, drink and play together. It’s also called “a party”, “Christmas” or “having friends over” and everyone has fun.

It’s a bit like when doggies get together after training and we smell each other’s back, but without the back sniffing which is not done in public within humans. 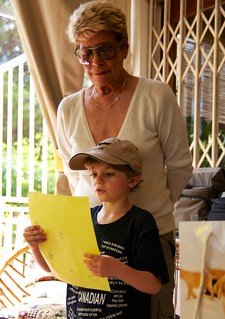 The specificity of the birthday is that a gift must be given to one of the humans present and it seems to be tied to the day he was born and that this is done every 1/7th year!! (yes, it’s complicated ,please try to follow! If you want something simple I can write a cats or chickens blog !).
So on Saturday, it was Glenn’s birthday and he celebrated his 1st year*.

While preparing for this party, his parents asked him what he would like as a birthday present (if you ask me, a new bowl, a small vanilla colored cage or a spit-roast for chicken will do).

Any standard human should have replied: a bag of dog food, or a bag of dried pig’s ears, or even a new sleeping doggie cushion!!
But not Glenn… Glenn asked his parents for money. 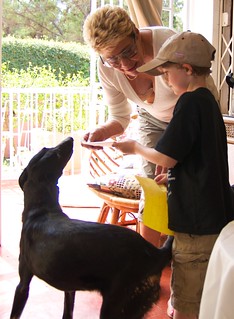 Glenn giving the pieces of money

“Money” is a human thing, I’ve already told you about it. Humans wake up early in the morning, go and pee (classic till now) then leave the kennel to go look for money. This generally takes them all day, except for when they stay in the kennel to play video games (I will explain another time).

“Money” looks like the papers in which meat or fish is wrapped, and sometimes it smells the same. Humans give each other pieces of money and the more pieces of money a human has, the bigger his or her machine-to-go-on-walks gets. Apparently going to look for money takes a lot of time and people who have a lot of money are also very fat, proof that they don’t have any time to run after balls or sticks!! Bâton (Stick) goes to look for money every day but Baballe (Ball) stays at home, which is why our machine-to-go-on-walks is small and Bâton is getting fatter.

So Glenn asked for bits of money, but not to exchange them for a machine-to-go-on-walks or for a bag of dried pig’s ears! He asked for bits of money to give to Auntie Carlina so that she exchanges it for bags of dog food for Animal SOS’ doggies (but why not ask for dog food bags directly? Probably because Glenn’s parents do not have a machine-to-go-on-walks big enough to carry them, proof that they do not have that many bits of money and therefore enough time to play with sticks and balls!!)

The medal to not get lost.

This weekend, Glenn came to give his bits of money collected from his owners his family and his friends to auntie Carlina. This made Auntie Carlina so happy that her eyes were all wet, like me after my evening bowl (see how happy I am afterwards!!), and to thank him she gave him a medal so that he will not get lost and can be brought back to his parents! I have the same on my collar and it is very practical!!. Well, now we have to find him a collar! One year old is a good age for a collar!!

Afterwards, he read a letter he had written for the occasion. A letter is like Baballe’s lists, it’s when you do not remember things, you write them on a piece of paper (but not a piece of money) to be able to read them later. Well, it is one of those human things because us, doggies, do not need to read, we just need to have things repeated often!!

So Glenn had forgotten why he was giving all these bits of money and thanks to his letter he remembered. He also said in his letter that he loved doggies, particularly dogs, and particularly big dogs like me, yes, I swear!! If you know how to read, his letter is here, if you are a doggie, believe me as I raise my paw and swear!. 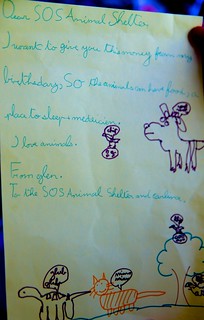 So Glenn became a « Young honoris causa doggie »** and thanks to him all of Animal SOS’ kennel-less will have a bowl everyday for a while!! Ah if all the doggies (honoris or not) would be willing to give a helping paw and give their extra bowls like this human cub did, a « dog’s life » would take a whole other meaning!! My eyes are in tears as though I had eaten a bowl!!

All I have to say is that I raise my bowl in Glenn’s honor , heck and that if one day I adopt another human, he or she will have to be a « Canadian » breed !! Glenn, if you can read me, you will always be welcomed in my kennel and I will always have some dog food or a roast chicken for you!!
Well, now I am going to count my sticks, I am sure I can offer one or two used ones to thank this little human cub as he deserves!!
Nuzzles to all, and particularly to Canadian-humans!!

One Response to The story of Glenn